Celebrating the working lives of East Londoners and Park visitors

Factotum – an employee who does everything, a Jack of all trades.

An apt description for the job of one visitor to the shed, a woman who had done many jobs, including being hired as Circus Worker by Willie Smart in the 60s.

“I had a circus job when I was about twenty-one. I saw this job advertised for a mother’s help in the circus. Would you believe it?! This was for the Smarts family. So I went for the interview and the owner of Smarts, an old man then, walked past me during the interview, said ‘hello’, and at the end of the interview they said, ‘Rather than be a mother’s help, would you like to join the circus?’ And I thought, oh, this is too good to miss!

It turned out it was a supporting role for the top acts. You were the person who goes on and takes their clothes, the high wire acts, and you stand at the bottom of the trapeze and catch things they throw you. But you do everything they do, because everyone in the circus in those days, and maybe it’s still the same, did everything. You took all the equipment down at night every few days when you are moving on, sell ice-cream, do all the jobs they do – even riding the elephant.

I had to do it. Someone was sick, one of the girls, and I had never been on an elephant, so you can imagine when they said you’ve got to ride the elephant through the town… It’s on film in some archive somewhere because the BBC were making a film of the circus at the time. A terrifying experience. It lives in my memory as one of those moments. Absolutely terrifying.

I travelled with them. I lived in a caravan that belonged to an Arab. You know, they usually have a troupe of tumblers, and I had one of their caravans.

It lasted less than a year. I got fed up with it because I had been out working and I was used to coming and going as I pleased, but the security in the circus was quite tight. They would want to know where you were, what you were doing. Actually, I don’t like being restrained. It wasn’t free and easy at all.” 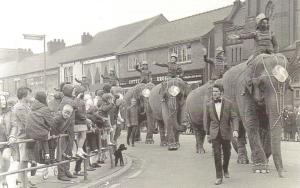